Week two in Chile. 62 days abroad, 8792 km away from home. We have been keeping it really busy these days – walking around, partying, bbq’ing, rehearsing, visiting record shops, eating and playing our first show in Chile!

The gig was quite early (3PM – 9PM), but it went really, really well. All the bands were absolutely killer, especially Metal Grave, Axe Battler and Condenados.

The first band that played was RIPPER, consisting of a few young talented headbangers. They had alot of energy and played in a similar style to old Sepultura. In fact, they did a cover of “Inquisition Symphony” (that instrumental song from Schizophrenia). Really cool! Check them out here.

Then, METAL GRAVE from Valparaiso played. They, on the other had, had more of an original sound. They played traditional heavy metal with tinge of doom (kind of reminded me of GOAT HORN sometimes), and a vocalist with a mild King Diamond-style voice. They were actually really great, and are definitely a band to look out for… this was their first show, and they are about to record some demo tracks. No song samples, only photos:

After came Axe Battler, a Santiago band playing NWOBHM-influenced heavy metal. They were absolutely amazing and sounded like a cross between SATAN and ELIXIR. They even did a CLOVEN HOOF cover (Gates of Gehenna). The vocalist had insanely good vocals, reaching ball-breaking heights… and the songs themselves were really killer. Of course, this is nothing extremely original but well-crafted heavy metal with SPIRIT. Check out a sample here.

After Axe Battler, we came on… I don’t have photos of our set yet, but I will add some soon! We played with Matias and Francisco from Condenados!

Then to finish the (early) night, Condenados took the stage, and crushed it to pieces. They played about an hour, and their extremely heavy doom metal made me (and several other people in the crowd) go insane. It’s the first show since the release of their new album, A Painful Journey Through Nihil (out on Shadow Kingdom Records). You can check out their songs here. 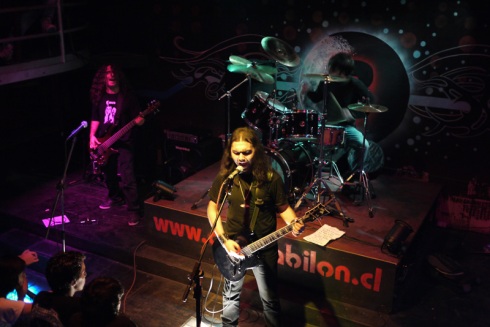 Matias!!! This guy had so much energy while playing bass!!

And then at the end of the set, I went on stage to sing a couple of songs with ’em:

Myself on stage with the Condenados guys

After this, we had a nice bbq on the roof of a 27-floor building in downtown Santiago. We had beer and choripan (chorizo sausages in fresh bread)! 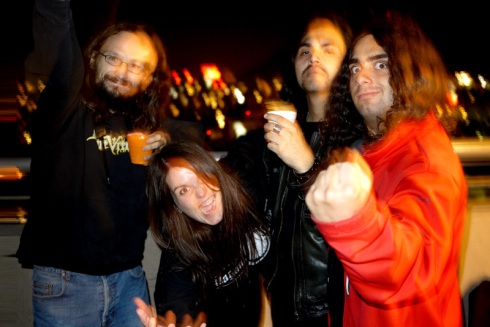 Condenados y Cauchemar, minus Francisco, who left right after the gig 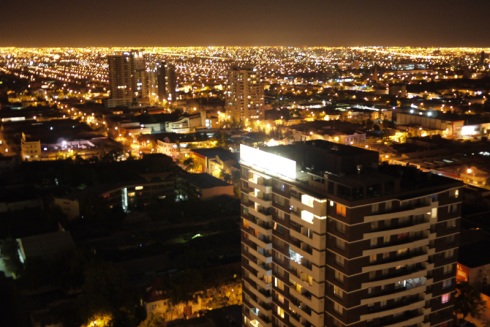 That’s pretty much all for yesterday. Beside that, this week, we visited a few record shops – all located in some commercial center. Some were ok, but the prices were so high that it wasn’t really worth it to buy anything. I still took a few photos for you guys: 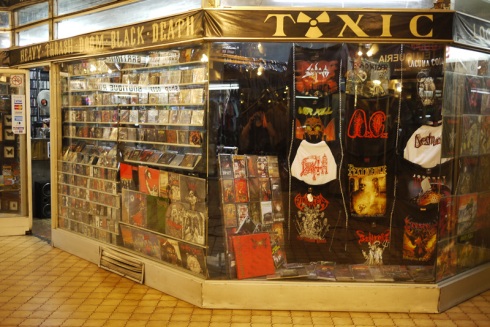 I am still missing photos of Templo (the best record shop in Santiago). I will take some at the end of the month, when we return to Santiago for a few days.

Everyone knows it, Chile is a country of wine. Over here, you can pay 2$ for a really fine bottle of extremely tasty wine. You can even find cheap 1.5L wine in plastic bottles!

Extremely tasty Chilean wine, with Andres Padilla in the background

And what goes hand in hand with wine? EATING! And BBQing! 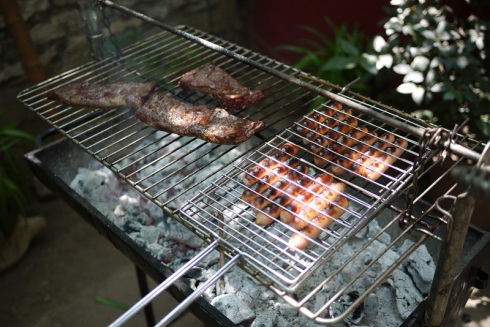 BBQ! Those sausages at the right were absolutely, amazingly, mind destroyingly good!

And here is a little wine-inspired recipe for you:

First, boil your water for your pasta. While this is happening, warm up the olive oil in a pan, then add the chopped tomatoes. 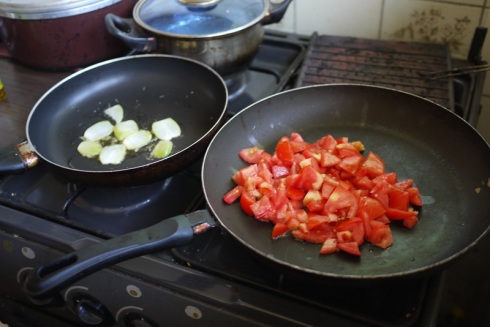 Don’t mind the gigantic garlic braising on the left…

Cook until the tomatoes are quite soft, and then add the whole garlic cloves. Add the pasta in the boiling water. Cook for 5 minutes, stirring constantly. Add tomato paste, water, laurel leaf and cook for another 10 minutes. Add a glass of wine, then mix everything. 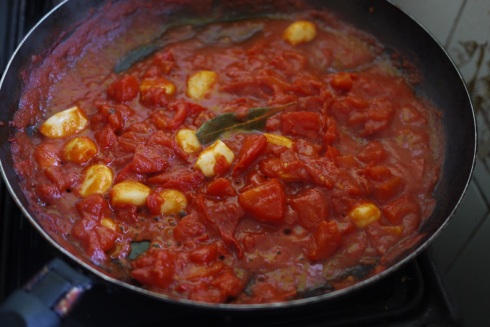 Remove pasta from boiling water. Add oregano and salt to pasta sauce. Press on one garlic clove to see if it is soft – if not, try adding a bit of water and keep on cooking.

When done, put the spaghetti in a plate, add the pasta sauce, top with black olives and basil leaves. Serve with garlic bread, and a nice glass of red wine! Now, you can kill vampires with your breath!

We also drank some nice beer. It feels good to be a country with a high German population; the beer here is absolutely amazing! 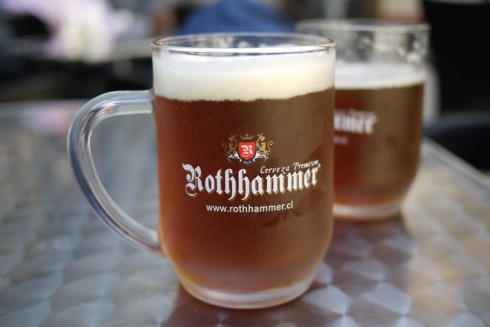 Kunstmann beer. We’ll visit the brewery in Valdivia in a week and a half. Great beer, but a bit more expensive than the other ones.

And we finally tasted some Chilean food: 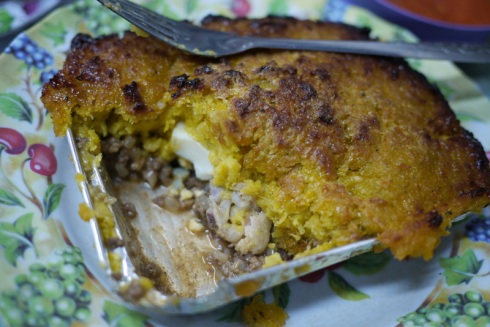 Pastel de Chocolo – some kind of Shepperd’s pie with an egg, some olives, a chicken drumstick and added sugar on top to make the crust nice and crusty.

Delicious lemon pie. Look at all that meringue!

That’s pretty much all for the food. We also saw some cool houses while walking around Santiago, like this one:

Well, that’s all for today. We are leaving for Valparaiso tomorrow… More news from there! Cheers!

This entry was posted on Sunday, March 13th, 2011 at 7:31 pm and posted in Chile. You can follow any responses to this entry through the RSS 2.0 feed.
« Black Arts Lead to Everlasting Sins
Headless Cross »

4 responses to “Into the Coven”