Coming into Dublin was a really cool experience; everything from the plane was emerald green – as expected. When we hopped on the bus to reach the city centre, we noticed that all the street signs were both in Irish Gaelic (their language), as well as English! Gaelic spelling looks really mystical, a little bit like what would come out of Lord of the Rings. 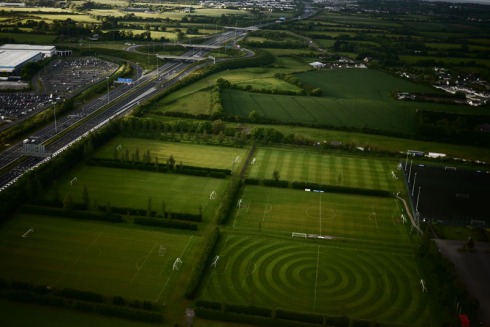 View from the plane. I swear the green was this strong! 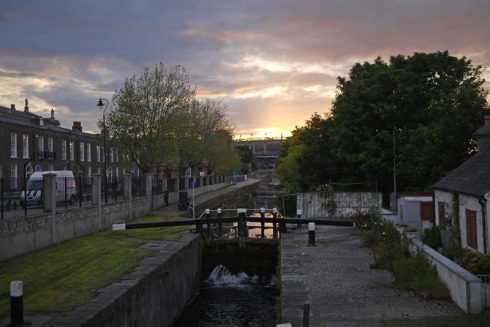 A view of the sunset on a canal, while walking to our friend’s place

We didn’t really know what to expect in Ireland, and really, we just wanted to relax our poor beaten up livers a little bit. We are pretty stupid, it’s not in a place like Ireland that we’d slow down on beer… So it is with that in mind that we arrived at my friend Barry’s house; armed with cans of Irish cider, and ale!! I’ve met Barry 4 years ago, at a PAGAN ALTAR gig at the ULU – and we have since kept in touch on the web. We saw each other again a few weeks ago at the Muskelrock fest, and when he learnt that we had no place to stay in Ireland, he promptly offered a room at his place. Thank you Barry!! Arghhh!!

The whole week was spent partying and eating, with a little bit of sight-seeing. Irish people are really, really fucking nice, it was loads of fun to spend a week there with them! Scobes, a friend, made us a total Dublin speciality; Coddle. It’s a really healthy stew made with onion, bacon, irish pork sausages, potatoes and carrots boiled together for three hours. Honestly, it was so unbelievably delicious that I licked my plate clean!

Everything boiling together in a cauldron

Coddle. Yeah, the sausages look like penises or thumbs or something. It looks nasty but I can assure you it tastes absolutely amazing!

Ourselves enjoying our meal in Barry’s living room

After the meal, we took this kind of lame photo of us strangely all wearing Mercyful Fate shirts… of different records! Weird! 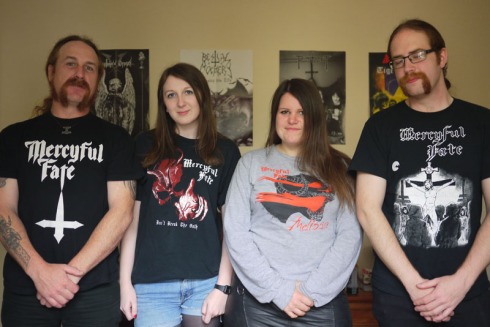 Frank, Cat, myself and Barry! From more recent to old Mercyful Fate…

And you cannot go to Ireland and not try the traditional meal of beef and Guinness stew – served with mashed potatoes, young carrots and boiled cabbage! We ate it at a pub called O’Neils, and seriously, it was so good I gulped the gravy down. Irish food is my kind of food! But it would be quite hard to eat that everyday haha 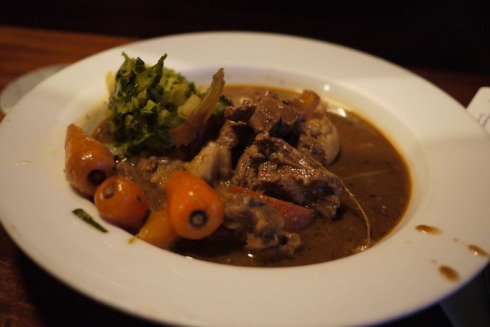 The KILLER beef and Guinness stew. It felt like I was at home, right in the middle of the holidays!

We also tried draft Guinness, of course. It was the cheapest beer on tap, and so different from the cans we have at home! The head was tasty and very creamy, but the body was smooth and velvety, with no bubbles at all. I thought it was quite pleasant, but would only drink it from time to time. François, on the other hand, really enjoyed it and had a few more on several occasions.

Guinness! A bit weird how that pint is glowing haha

What I really enjoyed was Irish red ale, especially the one made by O’Hara’s!  It tasted just perfect, just bitter enough and sweet enough, with the right amount of alcohol. It’s a shame that the beer itself is so expensive… 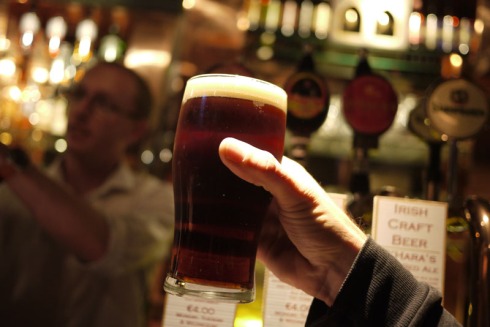 Anyway, enough about food and beer (for now)! We really enjoyed Dublin as a city. In fact, some streets reminded us of Ottawa (my hometown). I swear, the main street was almost the same as Rideau street, minus the crackheads!

A very beautiful street of Dublin

Dublin’s spikey-thing (in the distance), which is supposed to be their landmark?

Together with Barry and Cat, we visited the Dublin castle, which is located near a huge garden:

A part of Dublin castle and a huge, green garden – which seems perfect for some beer drinking and picnicking! This garden was laid out on the site of the Dubhlinn (‘Black Pool’ in Gaelic), from which Dublin gets its name.

The castle holds the Chester Beatty Library, which is the private collection of a rare manuscrit hunter… You can visit it for free, and honestly, it was the most impressive old book/manuscrit collection I’ve ever seen. You could see things that were over 1700 years old… it was absolutely insane. 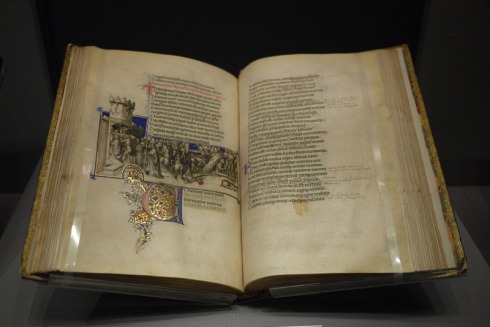 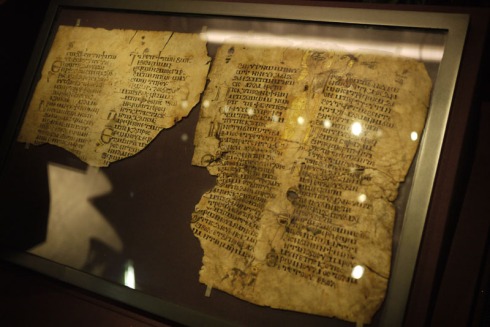 Some manuscript dating from 350 AD…

Around the castle is the Christ Church cathedral, which dates from the medieval times (it was first built in 1028!). It cost like 6 euros to enter, so we didn’t, naturally. Here are photos of the outside anyway: 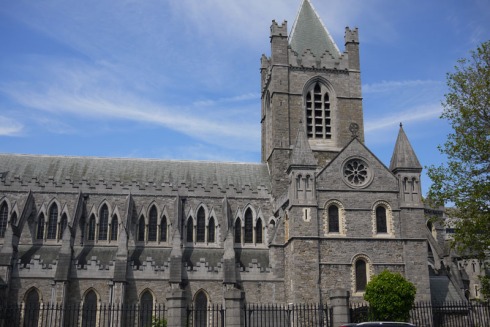 A cool arch leading to an old part of Dublin

Another very important landmark in Dublin is INTO THE VOID records! A brand new (and absolutely KILLER) underground independant record shop – located right in the center of the city (3A Whitefriar Place). I actually totally forgot to take photos of the inside, but I have plenty of their lovely basement – where they often have gigs and parties! 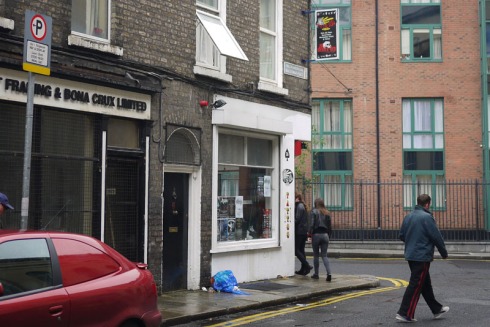 Barry and Cat entering Into the Void

Darragh (Invictus records), Cat, Barry and other people headbanging in the basement!!

We had to go to the Off Licence, a kind of beer store, to refuel on booze. I was surprised to find some Beerlao, imported straight from Lao!!! And some Moosehead, which is cheap but kind of tasty Canadian beer!!!!

I of course tried all sorts of local brews. This classy one was called “Galway Hooker”!!

On Friday night, we went to Darragh’s weekly metal night at Bruxelles, the famous bar in central Dublin. For those who doesn’t know, it’s the place that has the Phil Lynnot in front! Darragh graciously offered to share the DJ console with me, so I got to DJ for half of the night. It was really cool, the whole place was wild!!! I just wish it lasted until the sun came up, haha!

François and myself with Phil in person! (Sort of!)

Myself and Darragh, visibly totally possessed! Doesn’t Darragh look like Dio on this photo?

The inside of Bruxelles bar. Can you spot Barry’s familiar mustache?

Another cool pub we visited was The Harbour, which is located a bit outside Dublin. (Thanks to Eavan for bringing us there!) Half of the place is like a traditional country pub, and the other half is decorated with occult paraphernalia. It felt like we were drinking ale in Crowley’s living room:

On the same night, together with Eavan, we then went to Porterhead to savour their ales. They had a special of 3 different glasses for 5 euros. Pretty cheap for such quality, hand-crafted stuff! No photos though, only our faces hehe

Eavan and myself at Porterhead!

We then went for a small walk on the side of the Irish Sea. It was way too cold to swim, obviously!

François and myself on the side of the Irish Sea…

The last touristic thing we did (not that we did too many haha) was to visit St-Michan’s Church in Dublin. Yeah, we visit quite alot of churches, but this one is morbidly fascinating. Built on an ancient viking foundation dating from 1095, this church is unique because it contains some mummified remains in its crypts. The walls in the vaults are made out of limestone, which naturally kept the air dry – helping the corpses to stay preserved! Inside, there are bodies of a 800-year old man who was believed to be a crusader, a 400-year old nun, and two more people. We were even allowed to shake the hand of the crusader – which is supposed to bring good luck! Not sure if it’ll work… I’ll let you know.

St. Michan’s Church – this structure dates from the 1600’s. The inside is ugly, so I didn’t take photos of it! 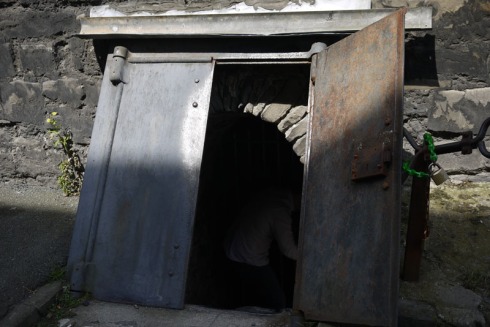 The entrance to one of the crypts 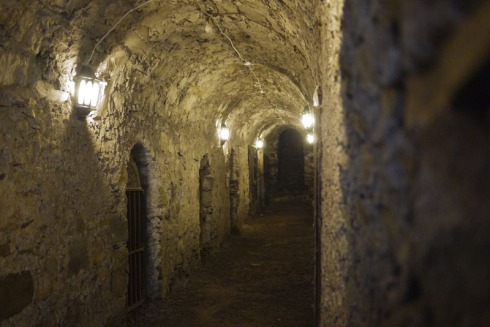 The mummy room! The corpses were discovered when the caskets deteriorated and collapsed (from the weight and pressure of caskets stacked on top of caskets).

This visit was really great, and pretty cheap too (3 euros per head)! Apparently, Bram Stoker visited this crypt in his childhood… and that eventually inspired him to write Dracula! Funny, as we have decided to go to Romania as our next destination… (Croatia and Turkey was impossible for us at this time..)

To thank Barry for hosting us and showing us around, we made him something typically… peruvian! We bought the freshest white fish we could find, and made some peruvian ceviche. It didn’t taste quite the same as the ones we had in Peru, but it was still really killer. I think Barry enjoyed it quite alot! 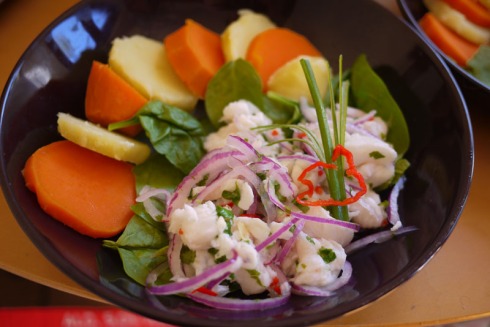 Peruvian-style ceviche, with sweet and yellow potatoes! Habanero peppers were used instead of rocotto peppers. I wish we had more fish also, but it was too expensive to buy more haha

For the whole week, Barry had a flyer of a “hot dog stuffed pizza” from Pizza Hut (a Ireland and UK only specialty!), which was hanging out on his counter. For some reason, it was calling me. It looked so good, and it was always there for me to look at it. And of course, it sounded like the best invention ever:

On the last night, we couldn’t resist anymore and ordered TWO of them! Turns out it was the nastiest piece of shit pizza I’ve ever tasted. It had so much potential (imagine it with chorizo or toulouse sausages instead of hot dog sausages!), but yet totally failed… it tasted like cheap sausage-stuffed cardboard. And we didn’t even get our free mustard drizzle! What the hell! 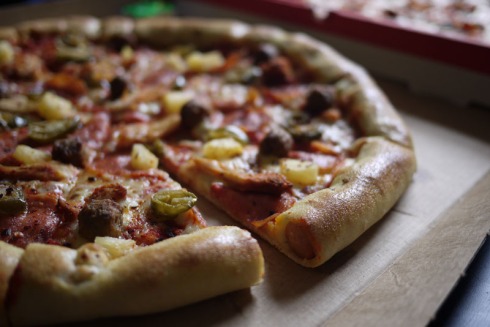 Anyway, that’s about it for Ireland! We’ll be back for sure, a week was too short and we barely had time to do more touristy stuff. We already miss all the friends we made there… snif snif!

On Wednesday, June 13th, we took a flight direct from Dublin to Nantes, which was full of metalheads going to Hellfest. It was quite weird to take a plane with so many other headbangers! A full report of Hellfest in the next post…

This entry was posted on Friday, June 22nd, 2012 at 6:31 pm and posted in Ireland. You can follow any responses to this entry through the RSS 2.0 feed.
« Rites Lunaires
Welcome to Hell »