Of The Sun + Moon

We caught a tourist bus at 7AM from La Paz to Copacabana. It was freezing cold in the morning… we’ve been to La Paz a month earlier, but now the winter has gotten much colder – we were shivering in our skin! Thankfully, the bus had blankets… it was well worth the 1$ more investment! After 2 hours of traveling, we reached a part of lake Titicaca (CORNHOLIO!) that we had to cross by boat. We got off the bus, took a 15-min watertaxi ride while the bus was being transported on a larger boat.

Our bus on a sketchy looking ferry

We then rode 1 hour more and then arrived in Copacabana. The town itself really doesn’t look like anything else in Bolivia; it had some kind of deserted beach resort feel. Anyway, we ate lunch and straight away took another boat on lake Titicaca to the truly mystical Island of the Sun (Isla del Sol/Isla Titicaca, located 2 hours away from the shore). By the way, Titicaca lake is 8000 km². Its hugeness is really overwhelming! It’s the biggest navigable lake in high altitude, located at 3800 meters above sea lever.

Copacabana, from the bus window

Copacabana from the Titicaca lake

Upon our arrival, we had to climb what it seemed to be a million stone stairs to the nearest village. We were constantly out of breath and thought it was never going to end, but the view was absolutely fantastic when we finally arrived. I mean, where else in the world can you see hilly green landscapes topped with ancient irrigations and a peaceful blue lake surrounded by a gigantic row of impressive snow-topped mountains? It was absolutely surreal. I now totally understand why the Inca revered this lake and island as being sacred. On top of it, there were no cars – only a few places had electricity (it arrived in the island 10 years ago – but it is still shunned by many).

Stairs leading to the south end of the island (Yumani community)

Two donkeys peacefully eating grass. The only animals living on this island were donkeys, pigs, sheep, dogs and a few llamas (some used for sacrifices everyyear!).

We arrived on the fourth day of an annual festival, some sort of celebration to San Antonio. In fact, it was just an excuse to dance and drink… there a battle of marching bands and tons of beer drinking (and chugging!) going on. You can see in the following photo that even women were dancing with their gigantic mugs of beer.

The next day, we woke up at 6:30 to experience the magical rising of the sun on the Titicaca lake. It was truly the nicest sunrise I have ever witnessed… we stayed there watching it for one hour, in the cold (it was maybe 5 °C) and it was more than worth it! We took the following photos from our hostel’s balcony: 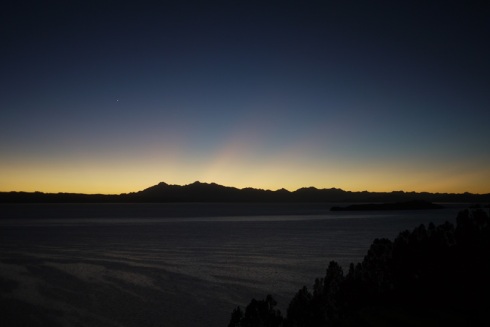 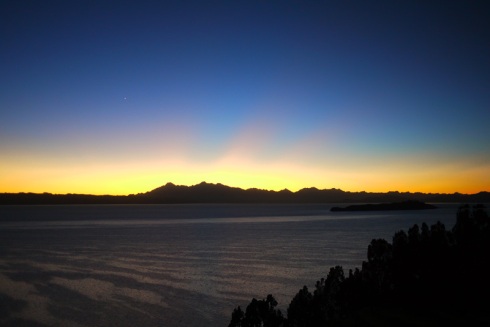 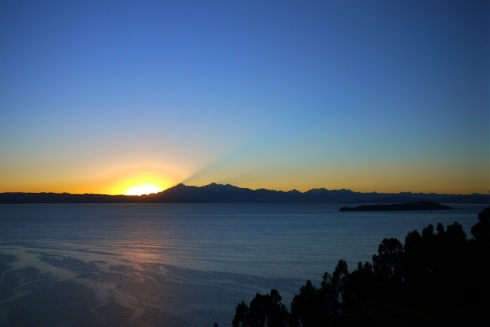 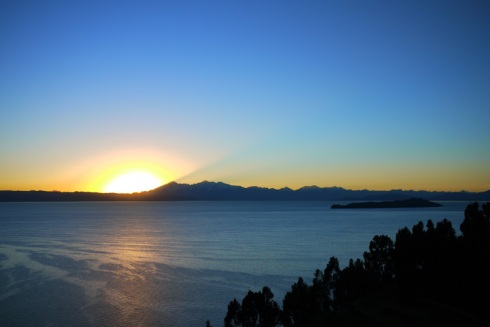 The community of Yumani under the warm colors of the sunrise

The mountains of Isla del Sol in the same time

We then took a boat to the north end of the island to visit its ancient trails and pre-Columbian ruins, which were a sanctuary during the Inca period (A.D. 1400 – 1532). 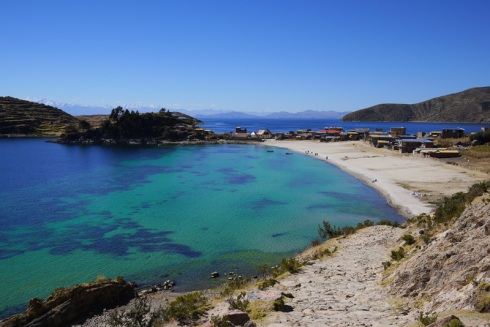 The north end of the island, going on the sacred trail to the ruins

We first encountered one of the most important Inca artefacts; the sacred rock from which Viracocha (the creator of the world in Inca mythology) rose. It was strangely located in the backyard of a house, which was growing corn!

We then continued on the long trail to the ruins. Among the way, we saw many beautiful sights, as well as interesting mountain irrigations: 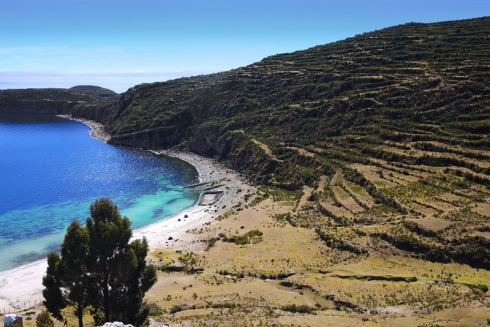 Pre-columbian irrigation systems. They put long rows of rocks in order to seal the water in, and then plant their cultivations. Most are not used anymore, but we saw some that were still active. 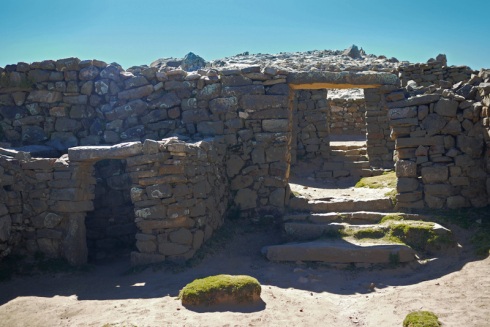 Moss on the ruins 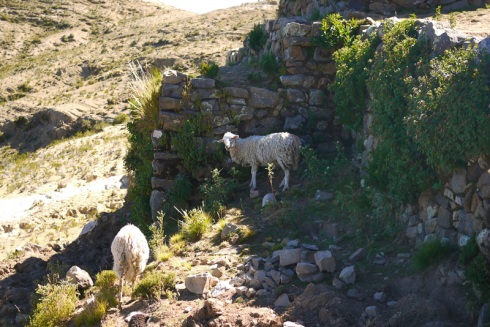 Sheep hanging out in the ruins

Chinkana. This place was like a labyrinth! There were many secret and dark passages in there... 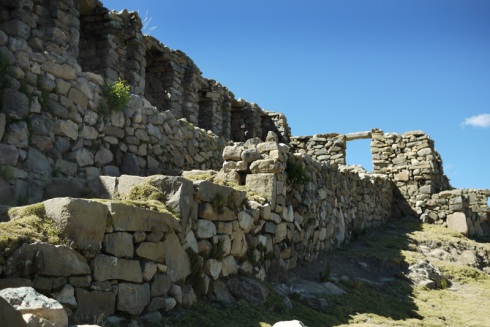 Chikana, again. It was in a remarkably good condition for such an old construction!

After visiting those overwhelming sacred sites, we walked 3 hours back to the South side of the Island. The walk was pretty rough – we sometimes had to climb 900 meters, go down, then climb again… all on an ancient Inca trail. The views were incredible… you could feel magic in the air. 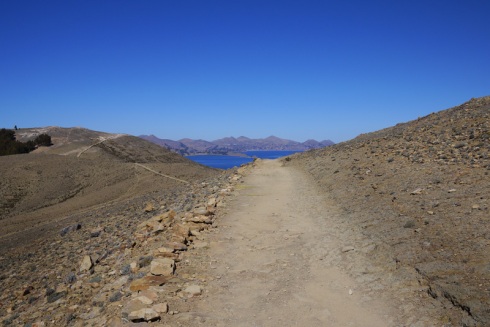 On the trail back to the South

The next day, we went back to Copacabana and spent the entire day there, hoping to find a way to reach Puno (the other side of Lake Titicaca, on the Peruvian side). We asked everywhere (agencies and tourist office) if the border was opened (there is an important protestation against the opening of a gold mine – by a Canadian company!) and how was the situation in Peru Unfortunately, we learned that it was worse than ever, and that the best way to cross the border to get into Peru was to take the water road (which meant taking a small boat on the Titicaca lake for 9 hours). Ok, it didn’t sound too bad, so we booked it. It cost us 30$ each (which is ALOT for Bolivia), and we had to be at the office at 7:30 AM.

Meanwhile, we visited Copacabana’s main tourist attraction; its Basilica, home of the Virgin of Copacabana. Considered a Black Madonna (Vierge Noire), she was sculpted by the grandson of an Inca ruler in 1582. Representing the Virgin as a Nusta or Inca princess, she was attractive and became so beloved that the Aymara indigenous people replaced their cult to Pachamama (Mother Earth) by the devotion to Holy Mary Pachamama, the Mother of the Man-God. The statue itself was located in a side-chapel of the Basilica, which was lighted with a hundred candles. 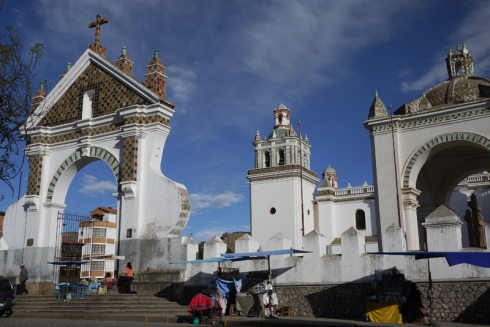 Main gates to the Basilica

François with Blackie, a friendly dog which followed us during our walks in Copacabana

The entrance of the Basilica. It's absolutely huge for a 6000-population town!

The entrance to the Chapel of Candles

Getting closer to the Mary-Pachamama

That’s all that we did in Copacabana, beside finding a new book in exchange for an old one.

The next morning, we started one hell of an adventure. We woke up very early, and went to the office, Combitours, where we had purchased the boat ticket to Puno, at the right time (7:30). Combitours opened at 8AM, and told us to go to the office of Panamericano (another tourist office). We did, and they made us enter a van, which eventually drove to the Bolivian migration office and the Peruvian immigration office. So far so good! We got our stamp to Peru, and then they told us to walk to some field a few blocks away from the offices. We arrived there to a small dock made out of stones, row boats waiting for us to transfer us to the bigger “deluxe” boats (which, the tour company promised us, was going to be equipped with comfortable bus seats). We just had to tell them we were with Panamericano when we entered the bigger boats. 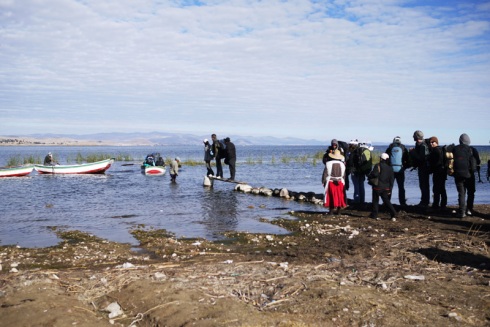 The row of poor wee tourists, getting into row boats. The bigger boats are on the right in the far distance

Backpackers getting in the row boats

Fortunately for us, the owners of the bigger boats were money hungry so they overpacked the boats to get a bigger revenue. We were thus packed at the back of the boat like mere cattle with everyone’s luggage, breathing the intoxicating fumes of the motor. There were people that were stuck on the boat’s roof for the whole 9 hours of traveling! The air was absolutely bone chilling!

My "cattle" friends and the luggage. Yeah, it was THIS cold!!

We were actually lucky though, as I later heard stories of protesters retaining the row boats until tourists paid them a bribe, tourists having to wait another 6 hours for new bigger boats to show up, boats running out of gas, or even tour companies not bringing tourists at the Peruvian immigration office at all! What chaos!

So we arrived in Puno at around 8:30PM. The sky was dark, and we were extremely happy to finally arrive on Peruvian ground. We then went out for a nice, greasy and comforting dinner, which turned out to be a barbecue restaurant!

The sunset on Lago Titikaka. Such beautiful colors! 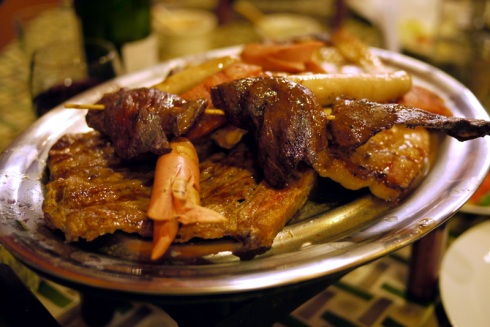 Our meaty feast: Beef heart (on a stick), steak, pork, chicken and three different kinds of sausages for the price of 6.66$!

Oh yeah, we forgot to mention this earlier. We got sucked into accepting fake money! The top bill is the real one, and the bottom bill is the fake one. They are almost identical, except that the bottom one has a different texture and misses a security element. 12$ down the drain...

The next day, we decided to visit the floating islands of the Uros. Located 5 km west of the Puno port, they are 58 islands made of tried totora reeds, which floats in case of attack (useful more than 500 years ago, when the Uros were enemies of the Incas – who lived really close by). The Uros were eventually conquered by the Inca Empire, to whom they had to pay taxes and do slave work. Nowadays, only 2,000 descendants of the Uros are still alive, although only a few hundred still live on the islands themselves. They lost their language 500 years ago, and now speak Aymara. 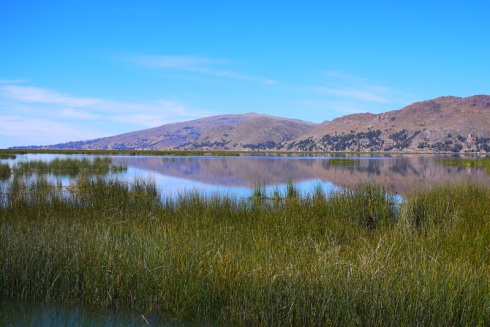 The reeds used by the Uros to make their islands 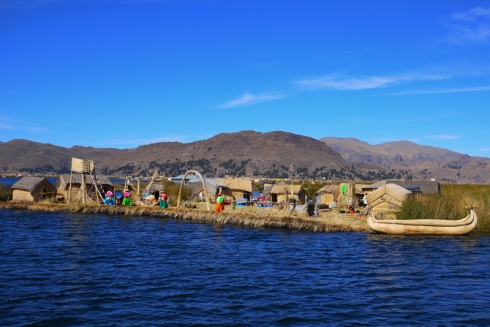 One of the floating islands. The reeds at the bottoms of the islands rot away fairly quickly, so new reeds are added to the top constantly, about every three months. The islands themselves only last 30 years!

Much of the Uros' diet revolve around reeds. When they are pulled, the white bottom is eaten for iodine. 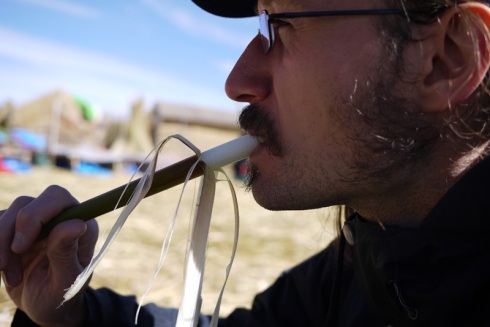 François and myself had the chance to taste those reeds. They were really refreshing, and tasted like bland salad!

A demonstration of how the islands work. The islands are made entirely from reeds; their dense roots develop and interweave which enventually forms a natural layer about one to two meters thick that support the islands. They are anchored with ropes attached to sticks, which are driven into the bottom of the lake. Everything is then covered with dried reeds. 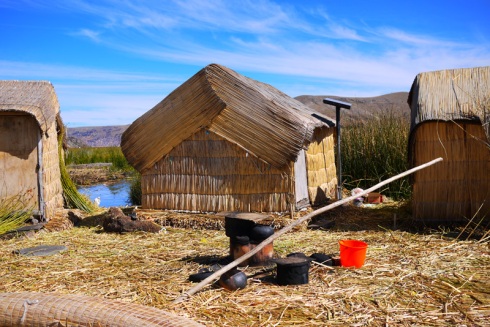 A home and a kitchen, on a floating island. Food is cooked with fires placed on piles of stones.

They even have small gardens! This one has/had wheat growing. Other gardens harvest quinoa.

We then took a reed boat to the capital of the islands, Hanan Pacha: 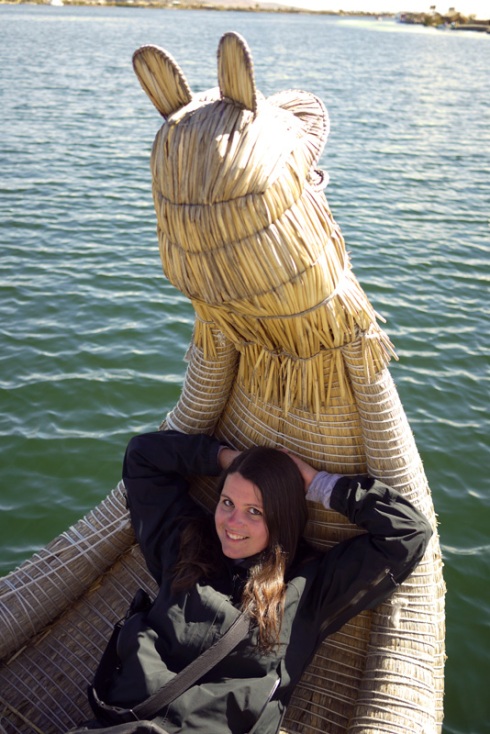 This one had a cute lama face!

Another floating island next to the "capital" 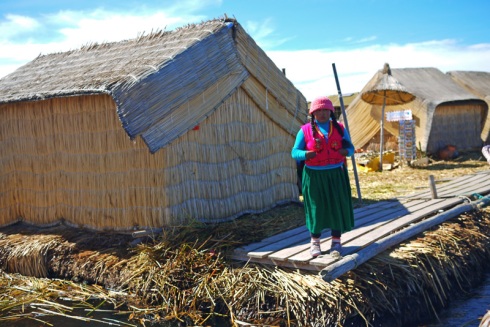 Some local woman "welcoming" us

And the following is what felt like walking on the reeds. It’s definitely a weird experience as you will see!

In the afternoon, we went to the market in Puno to buy some food for the evening, and we stumbled upon a funny thing, a quail egg seller; auto-sufficient with the quails, their eggs and hot water to boil the eggs! How great is that?? I just hope the quails are transferred to a bigger cage at night… 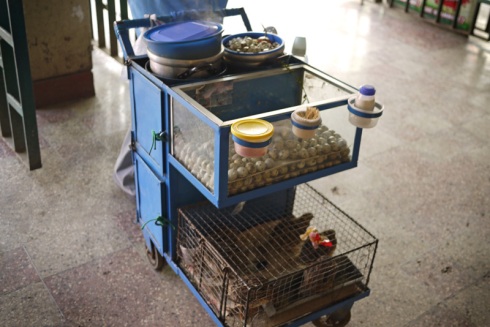 In the evening, we finally took a …14 hour bus ride to Cuzco (because there are political tensions causing the normal road to be blocked). Overall, we did 23 hours of travel to get from Copacabana to Cuzco, instead of the normal 10. Incredible, huh? Anyway, we arrived this morning, and are now in a beautiful hostel, 10 minutes walk from the center! (And they offer free pancakes for breakfast. YES!) This week will be the Sun festival, which is an Inca solstice celebration – the biggest festival of the year in Cuzco. More news soon!

This entry was posted on Monday, June 20th, 2011 at 7:33 pm and posted in Bolivia. You can follow any responses to this entry through the RSS 2.0 feed.
« Filth Hounds of Hades
Blood Ritual »