Cochabamba, home to 1,000,000 Cochabambinos, is the culinary center of Bolivia. It is said that people here live to eat, and do not eat to live. It is also home to Bolivia’s best recent metal band – Bestial Holocaust, whose guitarist, Cesar, hosted us in his home for a week. We basically only slept, ate, and drank beer. It was like a sweet, sweet vacation.

Cochabamba is made like many other South American cities; it is located in some sort of valley surrounded by mountains. Its climate is very nice, as its elevation is only 2700 meters above sea. A bit like Sucre, but more up north so it’s warmer. In fact, they call it the city of “Eternal Spring”, like Medellin (Colombia!) Tons of fruits grow in trees in the street, which you could pick for free. Cesar had Lemon, Mandarin, Apples, Grenadine and Maracuya trees at his place.

This is a gigantic statue of the Cristo, which has been copied from Rio’s statue (apparently the Cochabamba one is bigger). For 22 cents, it’s possible to climb its entrails and see a really beautiful view of the city. Notice the family resemblance between François and the statue, haha

View of Cochabamba from inside the Cristo’s armpit. Notice how the city is surrounded by a chain of mountains. These can be seen from everywhere while walking in the city. 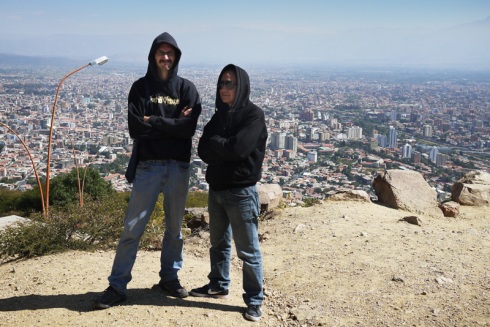 There were three adorable dogs living at Cesar’s place. Negra, Chica and Ardilla greeting us day and night, and were always there to play, fight or just give us a nice lively presence. 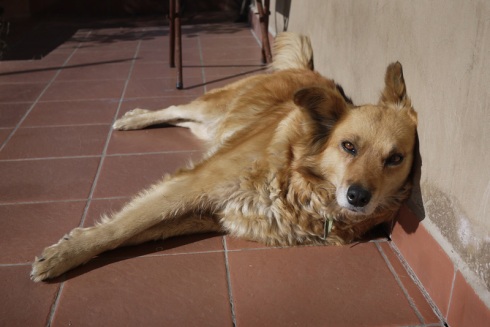 Ardilla, relaxing on the side of the house

Chica, a beautiful sausage-style dog that got rescued from a car accident 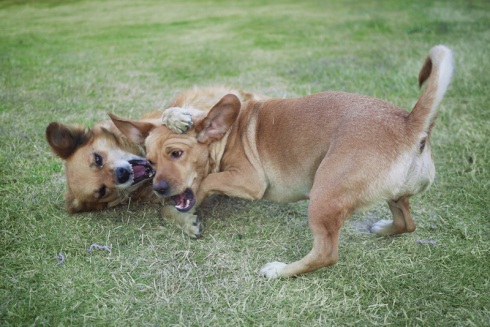 Ardilla and Chica were always fighting. It was quite entertaining!

Ardilla, again. She was really beautiful!

In the beginning of the week, Cesar, Sonia (Bestial Holocaust vocalist), François and myself went to the best place in Bolivia to eat pastel de queso (some sort of cheese empanada) and drink api. This was definitely one of the best restaurants we’ve been here – it was so delicious (and greasy!) 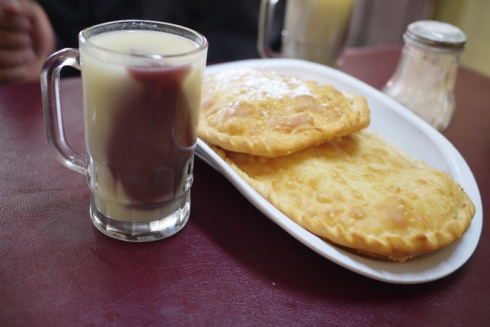 Api and two pasteles de queso. The api was a mix of white corn and purple corn. Just seeing this photo is making me salivate a river.

We also ate many other traditional meals:

Charque (dried llama meat) with corn, cheese, a potato and a hard-boiled egg.

Sopa de mani (peanut soup) prepared with love by Cesar’s mother. This soup was absolutely mind blowing! The broth is made by blending cooked peanuts and water, giving it a creamy taste. It doesn’t taste at all like peanuts – just yumminess. 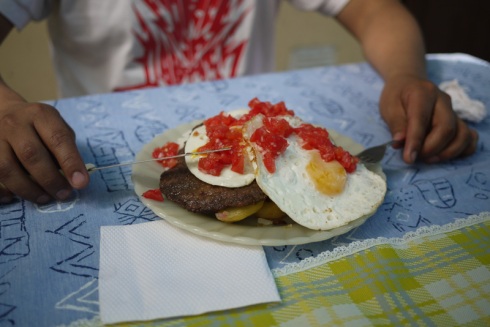 Sillpancho, a Cochabamba specialty. It consists of rice, fried slices of potatoes, a breaded piece of beef, fried egg with yellow still soft (this one has two – a special for Cesar) and tomatoes/onions. It’s one hell of an unholy mix, but it tastes really killer. 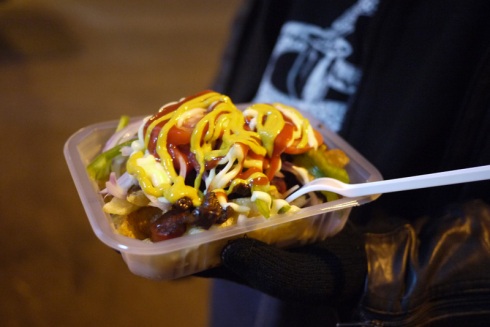 Pique a la macho, a unholy mix of fries, chopped sausages, beef, onions, peppers, tomatoes and topped with ketchup, mustard and mayonnaise. This was bought in the streets.

Our friend Cesar is a dentist, so we took advantage of it by getting our teeth cleaned. It’s was well deserved after so much junk food haha

Cesar and myself on the torture table

Everyday, when we wanted to go downtown, we were walking beside a little ghetto with colourful tents. I was wondering what the hell they were, until I asked… it’s apparently a group of gypsies that live there! One of them wanted to read my future or something. It was weird! 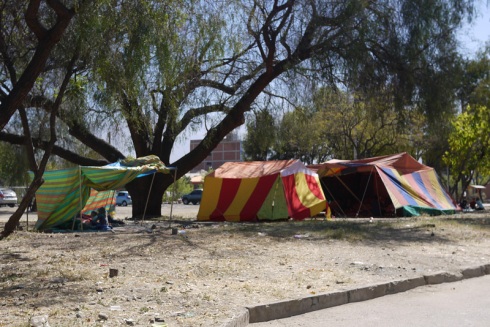 Like you see, we didn’t do too much in Cochabamba haha! Before we left, our friends organised a small departure party with a really killer bbq. It was really good, as it had many different ingredients and all: 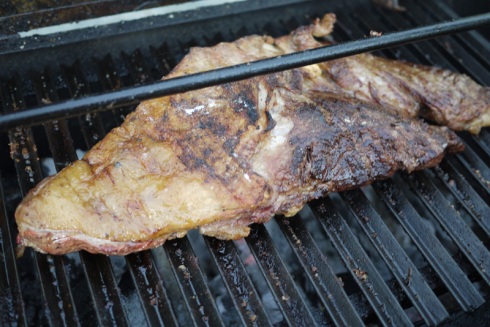 A huge piece of meat. It almost took the entire barbecue!

Angela, Sonia, François and myself in Cesar’s garden, waiting for the meat to be ready 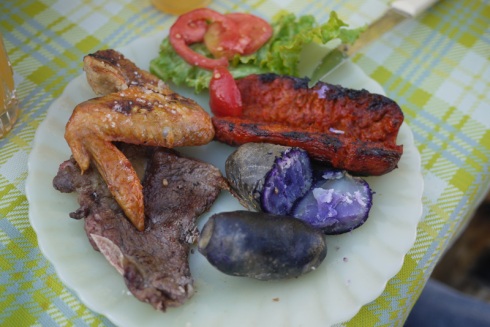 A plate of food. Notice the blue potatoes. Everything was so tasty!

Our next destinations are Copacabana (not the Brazilian one of course!) and Isla del Sol… and then hopefully cross the border to Peru if it opens up. And here is a little gift; a recipe of the mythical Sopa de Mani!

Cook the raw peanuts in beef stock until soft, and then put in blender in order to get a nice cream texture. Heat the oil in a large saucepan over low heat and stir in the onion and veggies. Cook slowly until the vegetables are soft, about 10 minutes. Stir in the peas let cook slowly another 10 minutes, stirring from time to time. Pour in the peanut cream, and the rice, then bring to a boil. Reduce to a simmer, partially cover, and cook without stirring for 20 minutes. Add chicken pieces, and then cook for another 15 minutes.

When ready to serve, season the soup with salt, pepper and hot pepper flakes to taste. Ladle into bowls and top with the crisp fried potatoes and a sprinkling of minced parsley.

And here is a Bestial Holocaust song for the cursed ones! Their new album is recorded and will be coming out on Iron Bonehead in the coming months, hopefully.

5 responses to “Filth Hounds of Hades”